The story begins with AJ, who walked into the church where I work and said, “I want to know God.” As a pastor, I was more than happy to reply, “Well, brother, you’re in the right place!”

After a short conversation about Jesus the Christ and Scripture’s telling of who he is and what he did, AJ responded to God’s love, repented of his sin, and chose to follow Jesus. And just like that, the heavens exploded with joy (Luke 15:7, 10), as did AJ and I!

So last Thursday our small group of 10 folks—AJ’s first real experience with the Church—met at the beach for his baptism. The most important event of the evening was AJ’s baptism, but I could not help but be moved by the actions of the two other men in our small band of believers. 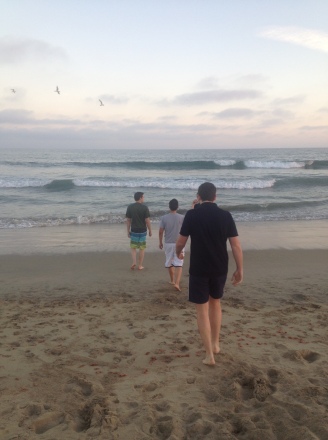 dressed for the water. Both donned board shorts and huge smiles, and were ready to wade into the chilly Pacific Ocean with AJ. It was a simple act of solidarity but a powerful example of the power of presence.

Just 6 months earlier, Zack was baptized in our apartment complex pool while John and a few others cheered him on. Zack was ready to return the favor. He had fresh experience with the power of baptism, of being welcomed into a group of believers, and the Holy Spirit’s arrival in his life. So when it was time for AJ’s beach baptism, Zack joined us in the water without hesitation. No one asked him to. No one had to. Someone new was submitting his life, his will, and his future to the Risen Christ and Zack wanted another taste of the action. He did not need to be baptized again, but he wasn’t going to miss the opportunity to wade into the cold surf to support the one who did.

It was such a simple act, but profoundly painted for me what the Body of Christ is called to do with all other believers, new and old: we are to wade the waters together.